It's rare to find someone on earth who emulates Jesus Christ, but we at Faith City Mission were witness to lives being changed by a man whose own spirit sat in heavenly places. We memorialize him today and remember his countless contributions to the people of Faith City Mission...

Clayton Stewart Watkins, Jr., beloved father, grandfather, brother, friend and pastor, passed into the presence of his Lord and Savior, whom Clayton served so faithfully, on March 10, 2019 with family at his side. He was born March 28, 1921 in Drumright, Oklahoma to Clayton, Sr. and Edna Lucille (Milligan) Watkins and they both preceded him in death along with his sister, Lucille Pattie, wife, Nina Watkins and their three children: Phillip, Debbie and Melody.

Growing up during the Depression Era taught many life lessons to Clayton. The most important one that he learned was that family is everything. The close bonds that his family had and the foundation of honesty and integrity that were forged in hi while living in the country's toughest time enabled Clayton to realize that love was like life - it will always go in the best and worst of times. Clayton's work ethic was incomparable and when he wasn't helping his father at his work, he was helping his mother at home. As a result, his knowledge base of everything from building, farming, raising livestock, tool making/forging, butchering and processing food ensured Clayton was ready for whatever challenge, or opportunity life presented to him. During high school, he was an admitted average academic student but loved athletics, especially playing football, during the State Championship years at Amarillo High School. After practice and games, Clayton would run the 9 mile trip home to complete his chores, study a bit and finally go to bed. He met the love of his life, Nina, when he was 15. Their love story began with a friendship based on living close by and mutual admiration. Nina was committed to serving the Lord and attended church regularly. Clayton realized how special she was and also began to attend church with Nina to be with her. As a youth, he didn't attend church and so the experience began to move Clayton in ways he was not able to readily understand or explain. In a field working, Clayton asked God to move in his life and he felt the presence of the Lord. The next Sunday, Clayton made his profession of faith at First Baptist Church of Amarillo and, as stated in Luke 15:10, the angels rejoiced along with Heaven when Clayton made that profession. In 1941, Clayton and Nina were married and he vowed to provide for her the best life he could. Together, they farmed with both planting and diary worked in the winter at Railway Express, International Harvester and the Zinc Smelter, once again proving that his love for family and work ethic would always and ever be the foundation of Clayton's life.

At the age of 26, he surrendered fully to the Lord and to the call of ministry. He attended college at Wayland Baptist College and preached at the Pantex Plant (used as low cost rental housing after WWII population growth) where he helped many others come to the Lord through baptism. He set the example for living in service to the Lord and to fellow man. Clayton was then asked to pastor churches at Locust Grove Baptist Church north of Canadian, TX, and Mt Blanco Baptist about 40 miles from Plainview.

Clayton moved to Louisville, KY to attend the Southern Baptist Seminary where he received his Masters of Divinity in 3 years. He then served at Park City Baptist Church between Louisville and Nashville, Riverview Baptist just south of Louisville, Summerfield Baptist outside of Hereford, TX, and Parkview Baptist in Plainview, TX. Clayton then entered chaplaincy training and worked in San Antonio, completing his Masters in Social Work in a medical setting. After serving two years as chaplain with Baptist Memorial Hospital, Clayton moved back to Amarillo to work with High Plains Baptist Hospital and Bivins Physical Medicine and Rehab. During his work there, he was interim pastor at Temple Baptist Church, Pleasant Valley Baptist Church, San Jon Baptist Church in NM, and Wheeler Baptist Church. He was then called to First Baptist Church Canadian.

Clayton designed a curriculum at the request of the Baptist General Convention for volunteer chaplains. This led to an invitation from the Texas Department of Corrections to develop and implement a curriculum for, and recruitment of, 1500 volunteer chaplains in the correctional facilities across the state, a training program that is still in place today. Through all this, Nina and the children were by his side - loving, supporting, and enjoying all of the experiences that the Lord had brought them to and through.

In 2003, Nina was called home to Heaven after a two year battle with Alzhiemer's. Clayton married Nelda and the seamless blending of their families was truly another gift from God. They served together at First Baptist Church of Channing where Clayton was interim pastor for 13 month. Clayton began to serve at Faith City Mission in Amarillo where, with Nelda by his side, he was able to actively help and reach out to others showing Christ's love for ALL. Meeting basic needs such as physical nourishment was as much a part of meeting the spiritual needs at Faith City Mission. His 12 year tenure there continued his lasting impact by increasing the Kingdom's reach. After Nelda's passing in 2016, Clayton continued his work at Faith City Mission before moving back to Terrell in 2019 to be near his children and their families until he was called home to Heaven where we are certain that he heard, "Well done, my good and faithful servant."

A life filled with experiences, service, honor and ever-present trust in the Lord, Clayton will be missed by all who knew and loved him.

Thank you for giving to the Lord, Clayton. We are lives that were changed!

Having a Heart of Giving 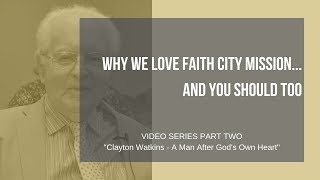 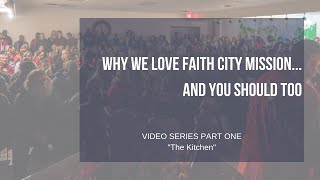